John Plowman is an artist whose expanded practice encompasses both studio and curatorial activity through which he explores his interest in the production of art, its site(s) of production and exhibition. He is interested in the gap between inspiration and fabrication. This ‘gap’ is a mental picture of the connection between the physical world and the world of ideas: the physical work involved in making a work of art, and the idea of the work of art – both before and after it is made. The Sketching Kit multiple was made by John Plowman during the course of a project entitled ‘Twilight Shift’. In which the site of the exhibition, the gallery, was also the site of production. Over a three week period, he worked on the production of the ‘Sketching Kit’ Contained within the compartments of the ‘Sketching Kit’ box will be a sketch book, pencil, pencil sharpener, eraser and the shavings from the sharpened pencil which has been used to make a drawing on the first page of the sketchbook. 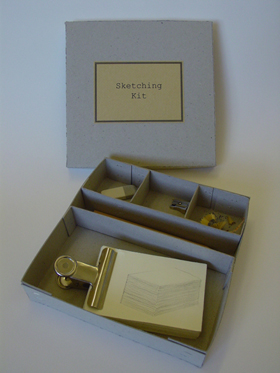