‘Blue Forms’ by British leading sculptor Richard Deacon were made for and used in the dance collaboration with Herve Robbe in 1993. Originally they were suspended on a series of poles strung across the performance space. As the audience came in, they were lifted down one by one and given to each member of the audience to wear (like doling out safety vests on entering a building site or factory). The audience were in the same space as the dancers, and the mass of blue was a strong visual component in the overall piece as they moved around trying to get a better view (or just getting out of the way of the dancers, who performed very energetically with the rocking wooden forms, somewhat regardless of the crowd). The cartoon anthropomorphic quality of the blue form was also used in certain quiet sequences of the dance piece. 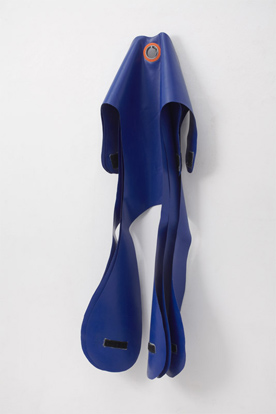