Make your own Chewed Gum by Franz West (born Vienna 1947) one of the world’s leading artists. His work, stretching back to the mid sixties, has always had an interactive dimension and has been shown in major events, such as Documenta IX and Documenta X, Kassel, Scuplture Projects in Munster (1997) and Venice Biennale 1988, 1993, 1997, 2003, 2011. In 1997 The Museum of Modern Art New York presented West with a solo show and his work has also been exhibited at the Museum Ludwig, Los Angeles County Museum, Museo Nacional de Reina Sofia, Kunsthalle Wien, MADRE Naples etc This ‘Certificate’, made and signed by Franz West, allows you to replicate his work ‘Chewed Gum’ yourself, which would then constitute as original, but it is also a wonderful image in its own right. The work was originally made for our Super Farmers Market where we invited artists to make work using anything that they can source at their local supermarket including food, packaging etc. 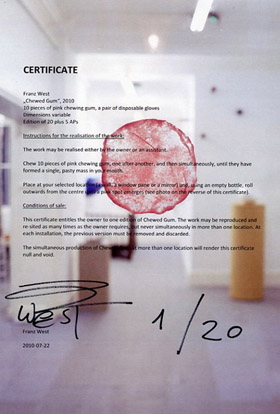